Berliner Philharmoniker: A Night of Rhythm and Dance - Waldbühne Berlin 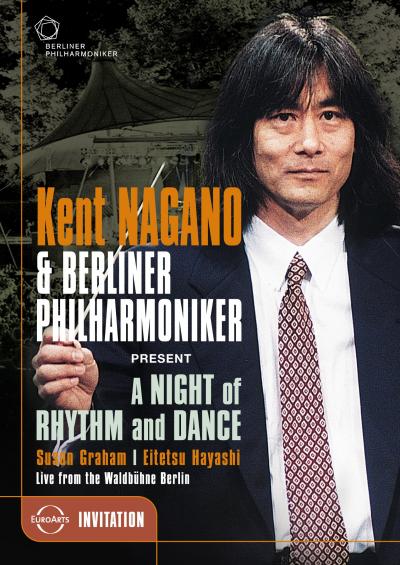 The Berlin Philharmonic Orchestra’s annual summer concert at the Waldbühne in Berlin is legendary. The Millenium concert, recorded live on 25 June 2000, gathered more than 22.000 people in one of the most appealing outdoor amphitheatres in Europe for one of the most popular classical music concerts in the world.
Kent Nagano named his programme of popular and rather unusual music from the 20th century “Rhythm and Dance”. It turned out to be an inspiring combination of classical pieces, show tunes, pops, and Far Eastern music, all brought together in a tasty musical stew and rightly labelled as one of the most exciting programmes ever performed at the Waldbühne.
It featured Gershwin classics with an outstanding performance by the American mezzo soprano Susan Graham, music by Ravel and the soundtrack to the successful Chinese film “Farewell My Concubine”.
Nagano injected the performance with so much sensuality and pulsing life that the audience rose to beat time with their feet and to gave him standing ovations. This DVD captures the atmospheric night with state-of-the-art recording, bringing the whole picture to the home screen in wide-angles and close-ups. It is released in the EuroArts Invitation series bringing you high quality at an attractive mid-range price.

Jean-Pascal Beintus: He got Rythm; Maurice Ravel: La Valse, Daphnis et Chloé; Isao Matsushita: Hi-Ten-Yu; Eitetsu Hayashi: Utage; Zhao Jiping : Farewell My Comcubine; George Gershwin: Fascinatin´Rythm, the Man I Love, Nice Work If You Can Get It, Someone to Watch Over Me, Summertime, I Got Rythm