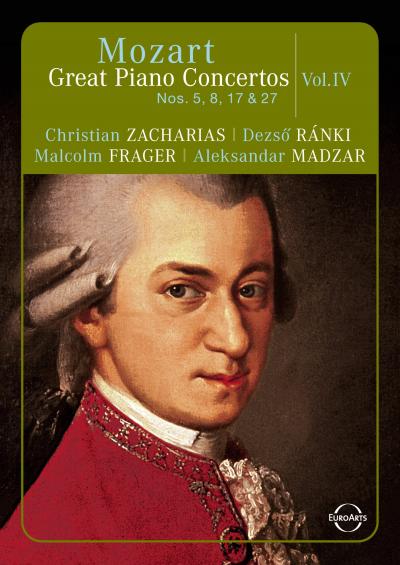 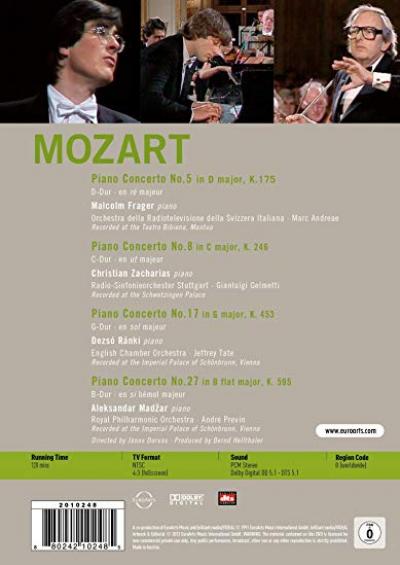 EuroArts releases a four-volume edition of Mozart’s most significant piano concerti in celebration of his 250th birthday in 2006. Mozart, who composed 21 piano concerti, can be regarded as the “inventor” of the popular piano concerto. Although J.S. Bach and his son had written numerous concerti for harpsichord or fortepiano and orchestra before him, Mozart’s enormous input to the genre is mostly due to his concerti being regarded as ‘popular music’ by his contemporaries: to be enjoyed and replaced quickly by newer works. For this series on four DVDs, the most influential, the most artistically challenging and the most popular piano concerti have been selected to be performed by the best Mozart interpreters of our time. The last volume features pianists Christian Zacharias, Malcolm Frager, Deszö Ránki and Aleksandar Madzar performing the piano concerti Nos. 5, 8, 17 & 27. The performances on this DVD were shot in highly attractive historical venues – at the Teatro Scientifico del Bibiena in Mantua, in the 18th century Schwetzingen Palace and in the Grosse Galerie at Schloss Schönbrunn in Vienna – capturing the atmosphere of Mozart’s lifetime.