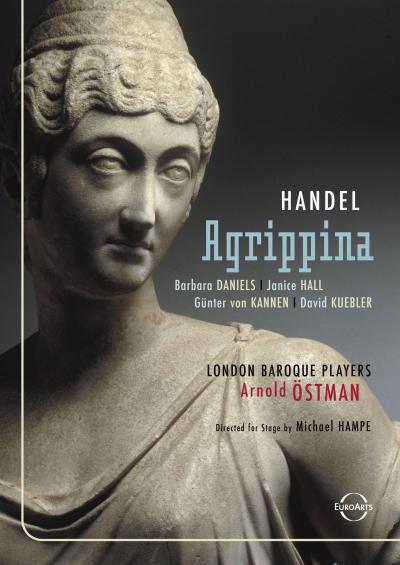 Composed when he was just twenty-four, Agrippina was Handel’s first theatrical success and is a sparkling example of his early work. It is full of his fresh, exuberantly inventive music and employs one of the finest librettos with which George Frederic Handel ever worked. The opera was composed and first performed in Venice in 1709 and, in a witty plot by an Italian cardinal, it tells the farcical story of the private lives of two ruthless figures in roman history, Nero and his mother Agrippina, and how they become entangled with the innocent Ottone and his lover Poppea. Typically for a Handel opera, the work is centred on a series of towering arias designed to show off the virtuosity of the singers.
This beautiful production by renowned opera director Michael Hampe was recorded at the exquisite 18th century palace theatre during the Schwetzingen Festival in1985. It combines the atmosphere of a true Baroque opera with an elegant, colourful staging and brilliant musicianship. The London Baroque Players, an outstanding orchestra for early music, which specializes in the music of the 17th and 18th century, joins an accomplished cast of singers, all baroque specialists.