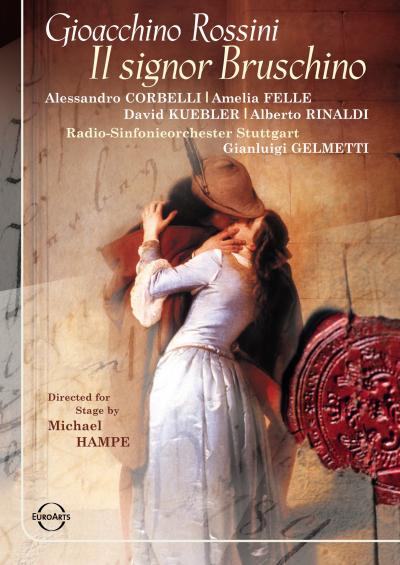 Il signor Bruschino is the last of the five one-act operas - farsa giocosa - in which the young Rossini first demonstrated his operatic genius. Among the ‘peculiarities’, which caused a sensation at its premiere 1813, was the daring experiment in search of new tonal effects in the overture, during which the second violins are required to tap their bows on their music stands. The opera is a mixture of saucy elegance, sizzling wittiness, cheeky orchestration and also some touching lyricism. It was realised to perfection in the small, jewel-like Rococo Theatre in Schwetzingen Palace, which was built in 1752. The stage is small and the beautifully elegant and this shining production by Michael Hampe, recorded in May 1989, provides one and a half hours of the entertaining story about “the son won in a game” as it is subtitled.
The staging transfers to the screen perfectly and the cast of principals, led by Alessandro Corbelli, Alberto Rinaldi and Amelia Felle provide musical excellence together with the flexible Stuttgart Radio Symphony Orchestra under Gianluigi Gelmetti.