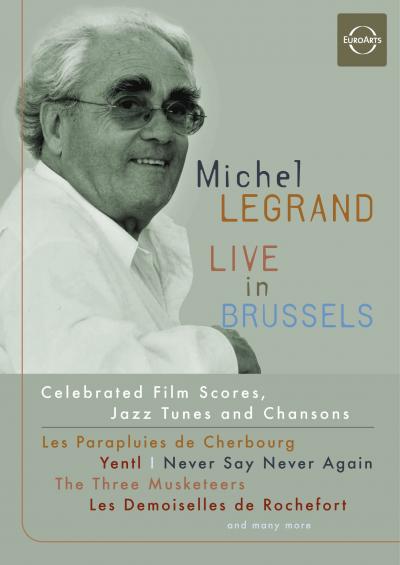 Singer, Pianist and Conductor Michel Legrand, a living film music legend, presents his most famous scores, jazz tunes and chansons on this DVD. Not many composers can claim to have written for both Edith Piaf and the James Bond films – and it’s precisely this fusion of European romance and Hollywood dynamism that has made Legrand one of the soundtrack world’s best known names. His career spans half-a-century and over 200 films, and he has received 3 Oscars and 5 Grammys. He has worked with many of the 20th century’s greatest artists, including Frank Sinatra, Miles Davis, Barbra Streisand, Edith Piaf, Aretha Franklin and Ray Charles and has collaborated with French Nouvelle Vague directors Jean-Luc Godard and Claude Chabrol as well as Hollywood masters Clint Eastwood and Orson Welles.
Recorded live in Brussels in 2005, this DVD features music from Yentl, The Umbrellas Of Cherbourg, The Three Musketeers, Summer of 42, Never Say Never Again, Edith and Ray's Blues to name but a few.