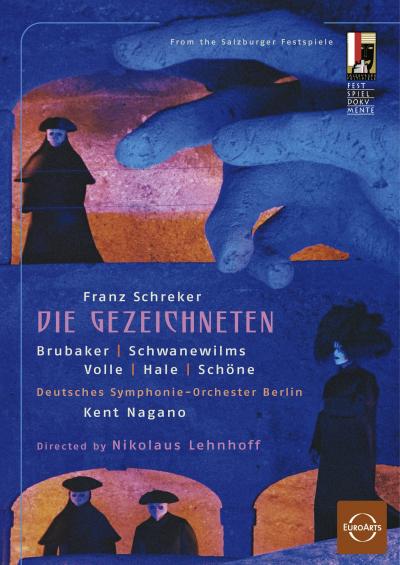 Live from Salzburg, the opening production of the Festival 2005 and a long forgotten masterpiece: Franz Schreker’s three-act opera Die Gezeichneten. Composed and first performed during the last stages of the First World War, the demanding piece – it requires more than thirty solo roles and vast orchestral resources – enjoyed great success in the 1920s and Schreker (1878–1934) was one of the most frequently played composers of his time. Schreker wrote his own libretto for the opera - a story of longing for an Elysium that is plunged into the most brutal and bloody reality – and set it to a score that has a delightful Mediterranean sheen.
However, he and his works were banned during the Nazi regime and as early as 1933, he was dismissed from his post as director of the Berlin Academy of Music.
The inspiring task of reviving the opera as the finale of a series of operas banned by the Nazis at the Salzburg Festival was tackled by the acclaimed Deutsches Symphonie-Orchester Berlin and an excellent cast in which the soprano Anne Schwanewilms stood out for her amazing vocal radiance and mesmerizing stage presence.
Kent Nagano, frequent guest conductor at the festival and specialist in 20th century repertoire, led a beautifully paced reading, showing an intuitive feel for Schreker's palette with all its subtle shading.
The stage design was inspired by a Renaissance Italian park, the famous sculpture park at Bomarzo, mirroring the dream of beauty. Altogether a worthy rediscovery of a truly astonishing masterwork!