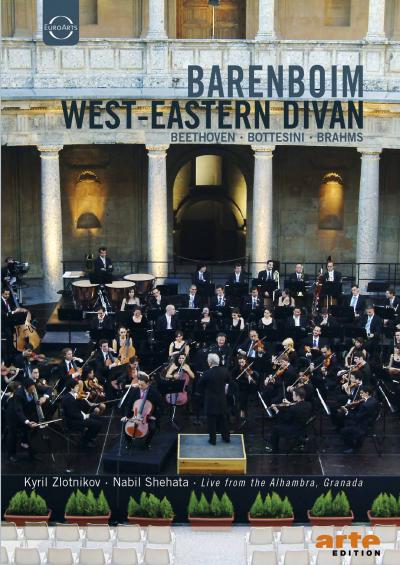 The West-Eastern Divan Orchestra is one of those success stories that is almost too perfect to be true. The internationally respected orchestra was founded by Daniel Barenboim and the late Palestinian writer and scholar Edward Said with young, highly talented Israeli and Arab musicians. The ensemble works to establish dialogue between the cultures of the Middle East through the experience of playing music together, and has gained cultural and musical respect all over the world.
The concert proves that it can bear comparison with veteran orchestras, even in familiar repertory staples. Combining technical polish and security, tonal beauty and transparency with youthful expression, passion and exuberance, the ensemble plays music by Beethoven, Brahms and others.
The event was broadcast live from the Palacio de Carlos V, Alhambra in Spanish Granada, thus hundreds of thousands of viewers across Europe were able to experience Barenboim’s conducting and this special orchestra.
The Alhambra (Red Castle) in Granada, Spain – a listed UNESCO World Heritage Site - was built and preserved over a period of social tolerance and cultural flowering, during the Moorish era, in which the three great religions lived together in an atmosphere of tolerance and mutual respect. Thus it provides particularly appropriate surroundings for an orchestra that fosters understanding across the cultural and religious divide.