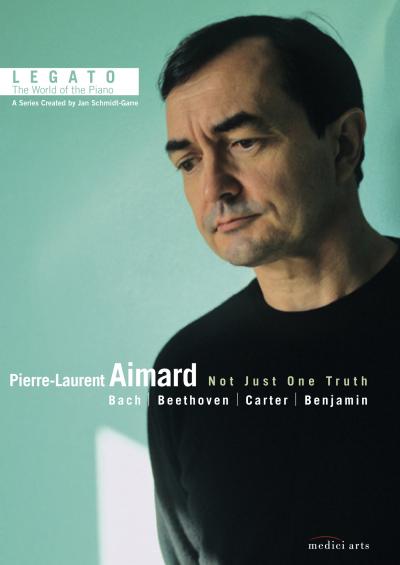 “LEGATO – The World of the Piano” is a DVD series dedicated to presenting the most fascinating of today’s pianists - their development, their ideas and, of course, their music. Each DVD in this series presents an artist and explores an aspect of the world of piano music. Viewers meet the artists and get to know their styles, their methods of working and their personal idiosyncrasies. These portraits provide an overall picture of the art of piano playing today and explain the piano renaissance, which is bringing audiences back to the concert halls. Pierre-Laurent Aimard was born in Lyon in 1957 and studied in Paris with Yvonne Loriod, wife of Olivier Messiaen, to whose music he is particularly close. Pierre Boulez appointed him as solo pianist to the Ensemble InterContemporain when he was 19 and he worked closely with Györgi Ligeti, who chose him to record his entire piano oeuvre. Aimard is a “modern” pianist in the best sense of the word – a performer who sees himself as an advocate of musical lucidity. His piano playing combines at the one hand the perfect and personal rendition of a work of music and on the other hand a process of objectification that paves the way to a general understanding of the work. This extensive portrait-cum-concert DVD features Pierre-Laurent Aimard in conversation with renowned music filmmaker Jan Schmidt-Garre (who created the LEGATO Series for MediciArts) under the telling title „Not Just One Truth“. Recorded live at the Akademie der Schönen Künste in Munich in spring 2008, the concert includes important and influential piano music from Johann Sebastian Bach’s Art of the Fugue and Beethoven’s second last piano sonata no.31, written in 1822, along with works by the grand seigneur of American composers, Elliott Carter (*1908) and of George Benjamin (*1960), who studied under Olivier Messiaen. In the introductory 30-minute informative portrait, Scholar Christoph Wolff and composer Elliott Carter speak about the music and Aimard’s readings of it. Thus, the viewer is truly immersed in Pierre-Laurent Aimard’s art of piano playing and comes to know one of the greatest contemporary pianists in concert, interview and documentary portrait.