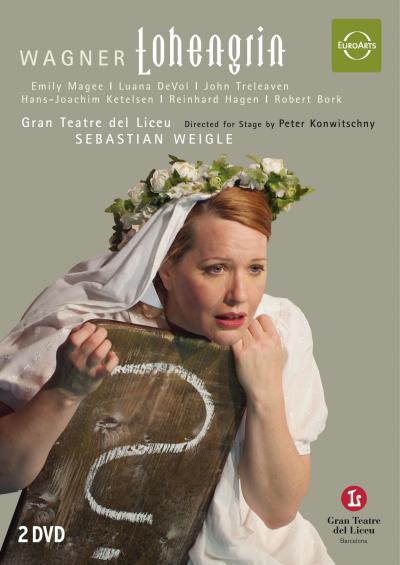 Peter Konwitschny’s celebrated and innovative staging of Wagner’s Lohengrin was recorded at the Gran Teatre del Liceu in Barcelona in 2006, where it was revived as an unconventional and spectacular view on the piece. Originally staged in Hamburg in 1998, it won not only the leading German theatrical award, Bayerische Theaterpreis, but also international critical acclaim. Director Peter Konwitschny has long been hailed a master interpreter of Wagner and his opera stagings have always been regarded as trendsetters within the Wagner community.
This production was no different – he set the story of Elsa and the swan-drawn knight, Lohengrin, in a classroom at school. Although it was genuinely surprising to see the people of Brabant wearing school uniforms and short trousers in front of a blackboard, it was far more than just a directorial idea - the piece suddenly acquired a rare new lightness, its action driven on by enthusiasm and elan. Konwitschny distanced himself from all the interpretative conventions that otherwise weigh so heavily upon the work, removing himself from the otherworldly fairytale that is normally conjured up in a series of beautiful stage pictures.
Supported by a cast of renowned Wagner singers including John Treleaven, Emily Magee and Luana DeVol, the performance was led by the Gran Teatre del Liceu’s musical director Sebastian Weigle, who has led the company since 2004.
This is a musically excellent and theatrically intelligent Wagner performance - not just for Wagnerites.