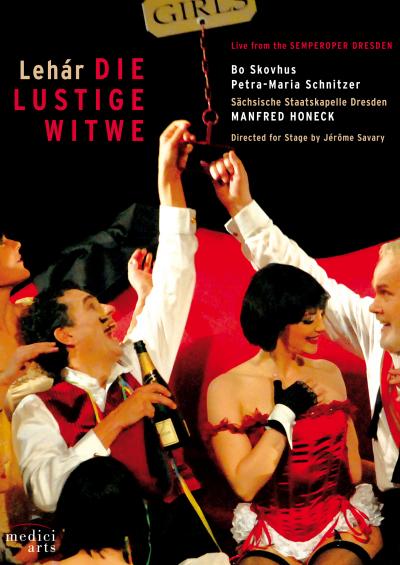 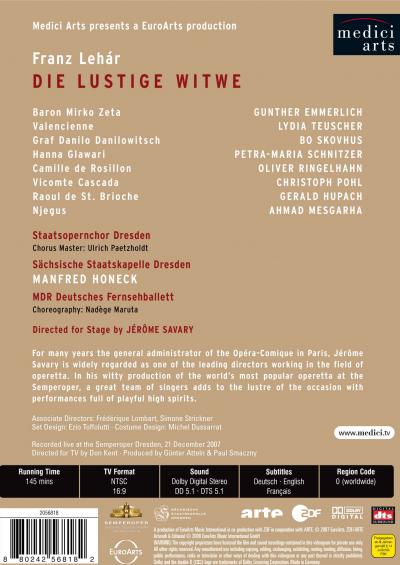 The Merry Widow (Die Lustige Witwe) had its premiere at Vienna's Theater an der Wien in 1905. The operetta, which tells the story of a wealthy widow in search of a new husband was a major success for its composer Franz Lehár (1870-1948) and quickly travelled to London and became a major Broadway sensation. Often called 'The Queen of Operettas', this is certainly the most celebrated and successful show of its kind ever written. The melodies and songs – “Vilja”, “The Merry Widow Waltz” or “You'll Find Me At Maxim's”, to name but a few - are lovingly played and sung the whole world ove. Combined with the frivolous Paris-set story line they make the operetta a sure box-office attraction. Frequently staged in an abridged version, this production from the Staatsoper Dresden features many musical numbers that are usually omitted. With Petra-Maria Schnitzer and Bo Skovhus the cast includes some of the most prestigious singers of the younger generation under the expert leadership of conductor Manfred Honeck. This staging by the famous opera director Jérôme Savary makes the "Merry Widow" a very colourful and a subtle tribute to the golden age of Hollywood, congenially directed for video by Don Kent, who has garnered much respect as TV director. Recorded live at the marvellous Semperoper Dresden in December 2007, this 145-minute performance of song and dance, promises a highly entertaining “night out” at home!