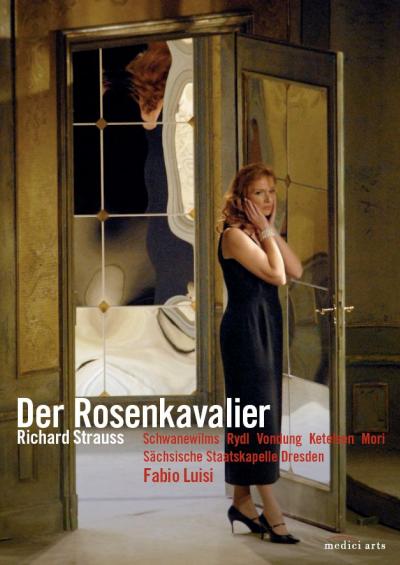 Richard Strauss (1864–1949) has, of course, always been a very special favourite at the Dresden Opera because many of his works were premiered there, most famously his Rosenkavalier in 1911. As if the world knew that this was to be the last important opera premiere before civilization broke down in the First World War, the premiere was turned into an event of enormous proportions, with special trains bringing the audience to Dresden to witness the latest cooperation between Strauss and his preferred librettist Hugo von Hofmannsthal (1874-1929). Der Rosenkavalier, despite its nostalgic setting in eighteenth century Vienna, deals with a variety of issues current in the early 20th century. Two of the most obvious were the status of women and the pending collapse of the ruling hierarchy. The authors described the work as a “Comedy for Music” and the criticism - as in all great social comedies - lies just beneath the surface. With the readings by Ruth Berghaus in Frankfurt and Herbert Wernicke in Salzburg in the 1990s, the piece has definitely lost any sweet rococo icing with which post war stagings might have covered it. Director Uwe Eric Laufenberg, who premiered the present version in 2000, puts himself in that great tradition: with the action taking place after the Second World War, he works out some of the more timeless issues of the work: bittersweet pathos, satirical social criticism and sexual farce as well as multilayered, comic wit and psychological characterization. The top-notch cast is led by Anne Schwanewilms as the Marschallin, Kurt Rydl as Ochs and Anke Vondung as Octavian - all three play roles that have become cornerstones of their repertoire. The orchestra of the Semperoper in Dresden plays the work, which has been a centrepiece of their repertoire ever since its premiere, from the original scores and under the experienced baton of their musical director Fabio Luisi. The recording – available on DVD and Blu-ray Disc - took place during a tour of the Semperoper company to Japan in November 2007 where they staged this Rosenkavalier to enormous success.