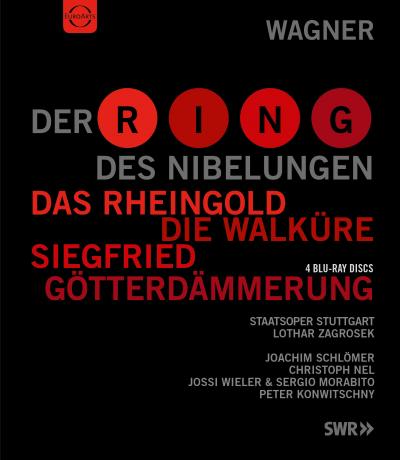 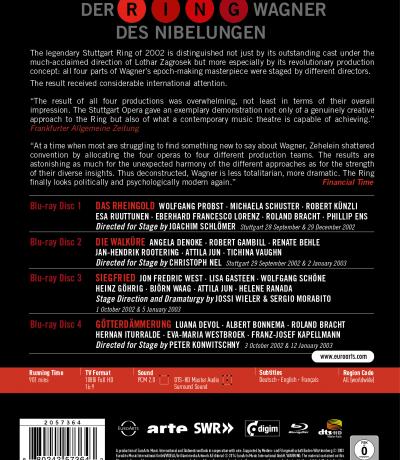 As a special Christmas offer, Euroarts presents the hugely successful Ring cycle from the Staatsoper Stuttgart in a box set. The prologue Rheingold and all three subsequent nights (Walküre, Siegfried, Götterdämmerung) of the “stage festival”, as Wagner put it, will be cherished by Wagner enthusiasts and lovers of great theatre all over the world. “Four operas – four stage directors” was the artistic idea behind the 1999/2000 cycle in Stuttgart. Their focus on the individual operas of “Der Ring des Nibelungen” rather than the cycle enabled the stage directors – handpicked by the successful Stuttgart Opera team surrounding Artistic Director Klaus Zehelein – to express their individual insights into the well-known drama of Siegfried and Wotan. Audiences, Wagnerians, and music critics alike were all enthusiastic about the result. As the Financial Times said: “At a time when most are struggling to find something new to say about Wagner, Zehelein shattered convention by allocating the four operas to four different production teams. The results are astonishing as much for the unexpected harmony of the different approaches as for the strength of their diverse insights. Thus deconstructed, Wagner is less totalitarian, more dramatic. The Ring finally looks politically and psychologically modern again.” Directors Joachim Schlömer, Christoph Nel, Jossi Wieler and Peter Konwitschny and their outstanding cast (Angela Denoke, Luana DeVol, Lisa Gasteen, Robert Gambill, Jan-Hendrik Rootering, Wolfgang Schöne, Jon Frederick West et al.) managed an epoch-making artistic enterprise, which will maintain its place as a highlight of Wagner staging for years to come.