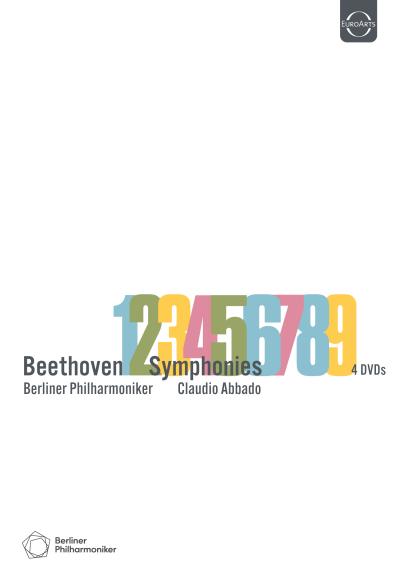 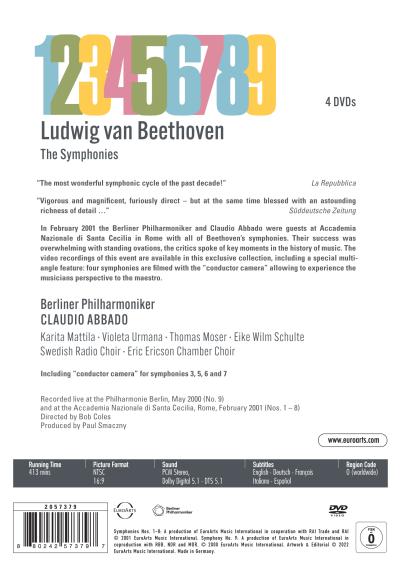 Claudio Abbado once remarked that, “With Beethoven, you never stop learning“ and indeed: the 75-year-old Milanese maestro has constantly reworked the symphonies of the master from Bonn (1770-1827). With this box containing all nine Beethoven Symphonies, EuroArts pays tribute to a consummate conductor and to his very special relationship, not only to the symphonic genius Beethoven but also to the world-class Berlin Philharmonic Orchestra. When they performed and recorded all nine Beethoven Symphonies at the Academia Nazionale di Santa Cecilia in Rome, the nationwide Italian newspaper La Repubblica simply called it: “The most wonderful symphonic cycle of the past decade.” The recordings of the turn of the millennium mark a high point in Abbado's relationship with the Berlin Philharmonic and his 12 years as their chief conductor, whilst constituting a major triumph for the international star in his Italian homeland. Each of the symphonies is of course a masterpiece in itself – each represents the composer’s musical idiom at a particular stage in his development. Be it the famous Pastorale, his 6th symphony, the popular 9th, with its characteristic motifs, the less commonly performed 4th or the 7th, which marked his leaning toward romantic undertones – Abbado’s interpretations are the fruit of decades of involvement with Beethoven. The Berlin Philharmonic transforms Abbado’s musical intentions meticulously, creating a unity of sound that can only be achieved through many years of shared artistic experience: Claudio Abbado was the orchestra’s fifth Artistic Director from 1989 to 2002 and has remained close to the orchestra ever since. Abbado's Beethoven cycle will certainly become a milestone for contemporary interpretation and this four DVD box pays tribute to his achievement.

Available as separate symphonies on iTunes: