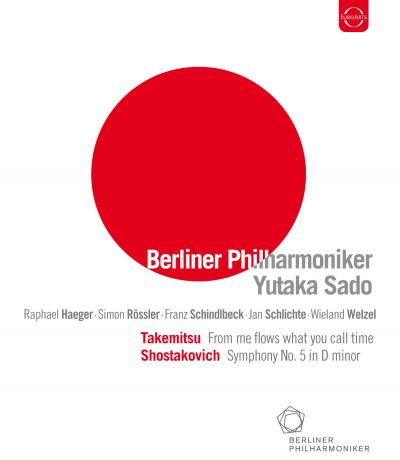 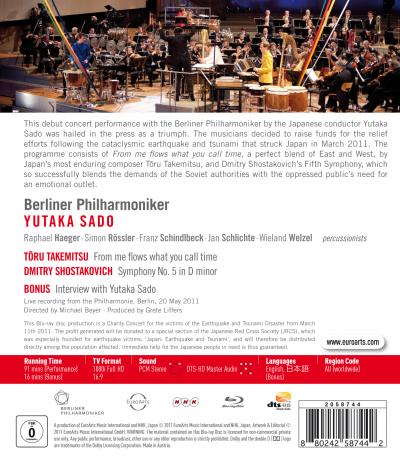 This debut concert performance with the Berliner Philharmoniker by the Japanese conductor Yutaka Sado was hailed in the press as a triumph. The musicians decided to raise funds for the relief efforts following the cataclysmic earthquake and tsunami that struck Japan in March 2011. The programme consists of From me flows what you call time, a perfect blend of East and West, by Japan’s most enduring composer Toru Takemitsu, and Dmitry Shostakovich’s Fifth Symphony, which so successfully blends the demands of the Soviet authorities with the oppressed public’s need for an emotional outlet. Live recording from the Philharmonie, Berlin, 20 May 2011. Directed by Michael Beyer. This DVD production is a Charity Concert for the victims of the Earthquake and Tsunami Disaster from March 11th 2011. The profit generated will be donated to a special section of the Japanese Red Cross Society (JRCS), which was especially founded for earthquake victims: ‘Japan: Earthquake and Tsunami’, and will therefore be distributed directly among the population affected. Immediate help for the Japanese people in need is thus guaranteed.

Toru Takemitsu: From me flows what you call time; Dmitry Shostakovich: Symphony No. 5