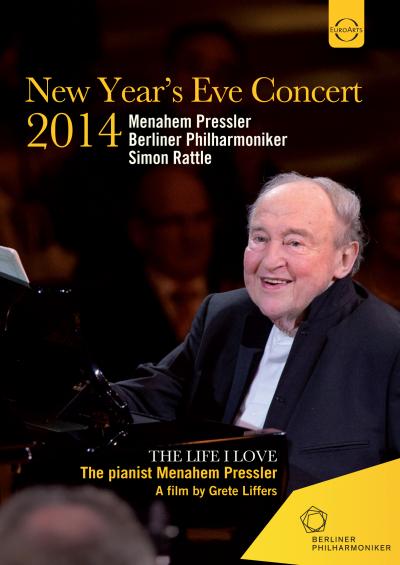 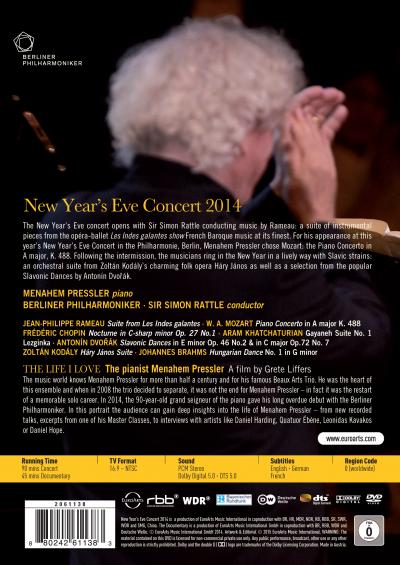 New Year’s Eve Concert 2014 opens with Sir Simon Rattle conducting music by Rameau: a suite of instrumental pieces from the opéra-ballet Les Indes galantes show French Baroque music at its finest. For his appearance at this year’s New Year’s Eve Concert in the Philharmonie, Berlin, Menahem Pressler chose Mozart: the Piano Concerto in A Major, K. 488. Following the intermission, the musicians ring in the New Year in a lively way with Slavic strains: an orchestral suite from Zoltán Kodály’s charming folk opera Háry János as well as a selection from the popular Slavonic Dances by Antonín Dvorák.

THE LIFE I LOVE - The pianist Menahem Pressler - A film by Grete Liffers. The music world knows Menahem Pressler for more than half a century and for his famous Beaux Arts Trio. He was the heart of this ensemble and when in 2008 the trio decided to separate, it was not the end for Menahem Pressler – in fact it was the restart of a memorable solo career. In 2014, the 90-year-old grand seigneur of the piano gave his long overdue debut with the Berliner Philharmoniker. In this portrait the audience can gain deep insights into the life of Menahem Pressler – from new recorded talks, excerpts from one of his Master Classes, to interviews with artists like Daniel Harding, Quatuor Ébène, Leonidas Kavakos or Daniel Hope. The documentary has been awarded the Grand Prix at the Golden Prague Festival 2015.