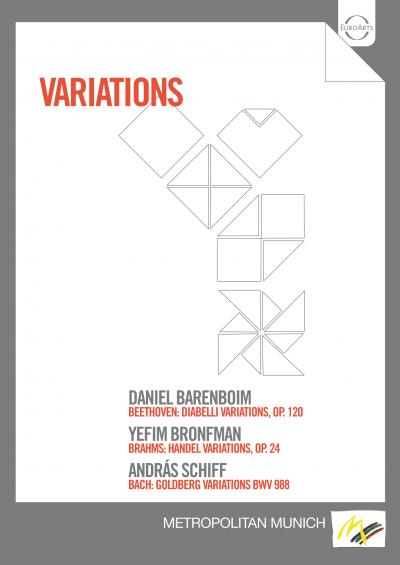 It's first release from the legendary Metropolitan Munich Catalogue. Three of the greatest sets of keyboard variations ever composed are presented here, performed by three of today’s greatest artists. András Schiff, Daniel Barenboim and Yefim Bronfman go to the heart of these monumental creations in performances that are highly personal. They sensitively balance the contrasting aims of Bach, Beethoven and Brahms, who were often referred to by nineteenth-century German critics as the ‘Three Bs’ because of their supposed primacy in the history of central European classical music. Barenboim/Beethoven: Recorded at the Gasteig (Philharmonie, München), 1991 (60 mins), Bronfman/Brahms: Recorded at the Max-Joseph-Saal of the Münchner Residenz, 1987 (29 mins), Schiff/Bach: Recorded live at the Reitstadel in Neumarkt, 1990 (81 mins)