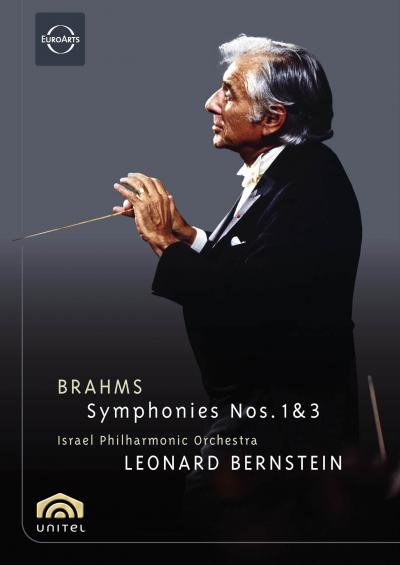 The great musical communicator Leonard Bernstein (1918-1990) joined forces with his favourite orchestra, the Israel Philharmonic Orchestra, for this recording. Since his first engagement with the orchestra in the mid 1940s, the famous musician and composer had worked closely with the ensemble on numerous concerts and recordings over a period that span half a century, eventually taking on the role of honorary conductor.
In this live recording, filmed at the Great Concert Hall Jerusalem in 1978, Leonard Bernstein leads the Israel Philharmonic Orchestra in a revelatory performance of Brahms’ Symphonies Nos. 1&3. The orchestra’s strong, densely textured style has an aesthetic quality that is particularly well suited to Brahms and the late 19th century German sound.
Bernstein’s readings of Brahms, however, have never been conventional. Neither could they be described as being tied to tradition. This skilfully recorded DVD provides another exciting interpretation from a full-blooded musician who was never content with reproducing the ordinary – a legendary document.