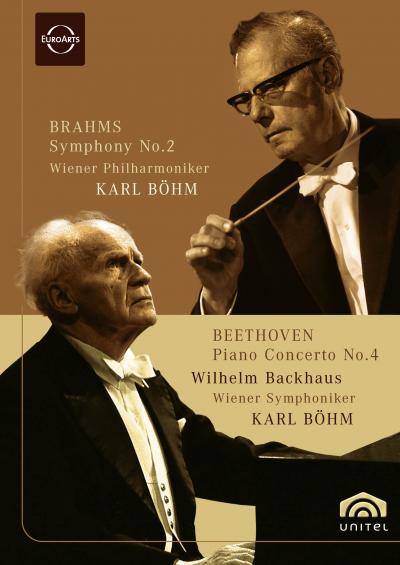 This DVD brings together two of the major figures of 20th-century music, Wilhelm Backhaus (1884-1969) and Karl Böhm (1894-1981), in a classical programme of Beethoven and Brahms.
The recording of the Beethoven Piano Concerto, filmed in 1967, can rightly be regarded as the friends’ legacy since it was among their last performances together.
Backhaus suffered a heart attack on stage and died two years after this recording was made. Many regard him as the greatest 20th century interpreter of Beethoven. He was a consummate artist and a life-long admirer of Brahms whom he had met at the age of 11.
Backhaus and Böhm were friends for nearly forty years and collaborated in concerts on many occasions. Both were renowned for their exceptional technical and musical brilliance.
The 1970 performance of the Brahms symphony with the Vienna Philharmonic Orchestra was recorded in the Musikverein in Vienna. It shows Böhm’s command of the orchestral ensemble, and his legendary ability to draw from the musicians an unequalled sonority, textural clarity and subtlety of rhythm. Both recordings on this DVD are testaments to impeccable musicianship.