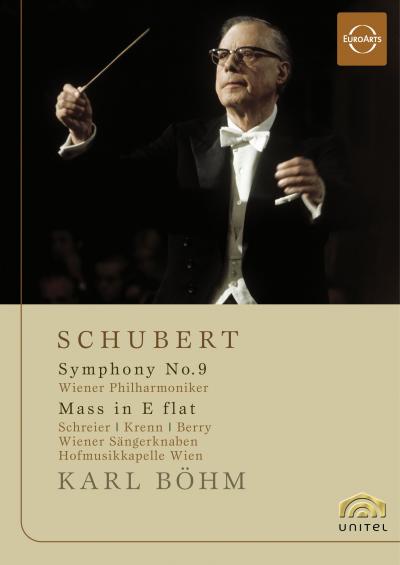 The unforgettable master conductor Karl Böhm (1894-1981) – one of the most eminent musical leaders of the 20th century - can be enjoyed conducting two key works by Schubert on this DVD. Recorded in Vienna in 1973 and 1976. The concerts show Böhm in his prime and reveal him as a natural Schubert conductor, whose sparkling performances are full of freshness. Schubert (1797-1828) composed the Mass in E flat, his finest sacred work, and the Great C major Symphony in the year of his death. Karl Böhm’s conducting reflects the naturalness and clarity of these compositions and his favourite Vienna Philharmonic bring their unique warmth, wit and wisdom to every bar of the music. Among the soloists for the Mass are the eminent Walter Berry and Peter Schreier. They are joined by the world-famous Vienna Boys’ Choir. Conductor, soloists and orchestra create a timeless musical feast and this DVD can truly be regarded as part of the legacy of one of the greatest Schubert conductors of the 20th century.