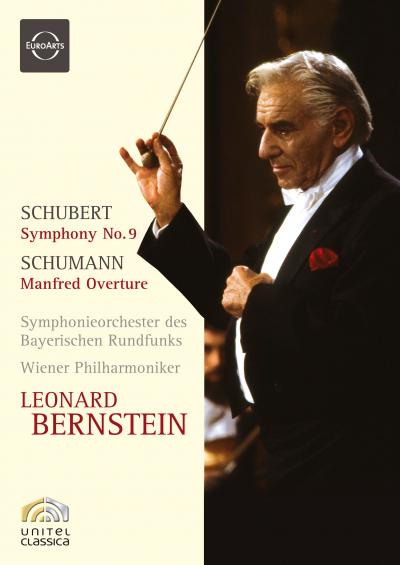 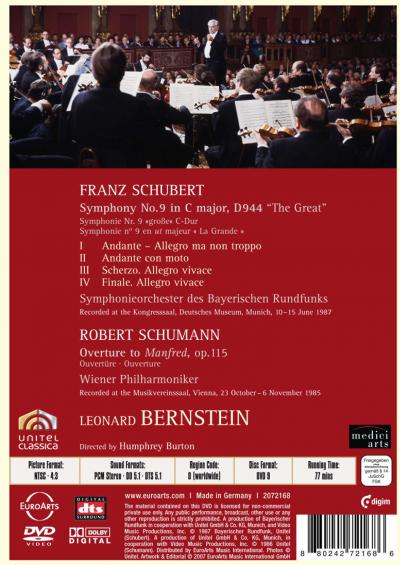 EuroArts celebrates Leonard Bernstein’s (1918-1990) recorded legacy with the release of a new DVD in their series of recordings by this outstanding musical personality. The disc features Franz Schubert’s (1797-1828) Ninth Symphony (called The Great) and the Manfred Overture by Robert Schumann (1810-1856). Recorded live at the “Deutsches Museum” in Munich in mid-June 1987, the DVD captures a remarkable concert that – after having started with shock and a delay brought on by a bogus bomb threat – proved to be an inspired performance. Bernstein and the Bavarian Radio Symphony Orchestra played Schubert’s final Symphony No.9 in C major, which for decades was known as Schubert’s Symphony No.7 and is now increasingly frequently also referred to as his Eighth due to new insights into its genesis. However numbered, the work was euphorically admired by Robert Schumann, when he found the as yet unperformed score in 1839. A decade later he himself composed a masterpiece of musical characterization in the German Romantic tradition – his overture after Byron’s poem Manfred. Leonard Bernstein leads his favourite orchestra, the Vienna Philharmonic, in a performance reminiscent of the concert in which he took over the New York Philharmonic in 1943, when the ailing Bruno Walter was forced to step down at the last minute. He then led the New Yorkers in this very piece by Schumann recorded on this DVD and, virtually overnight, became a new star in the galaxy of international conductors.