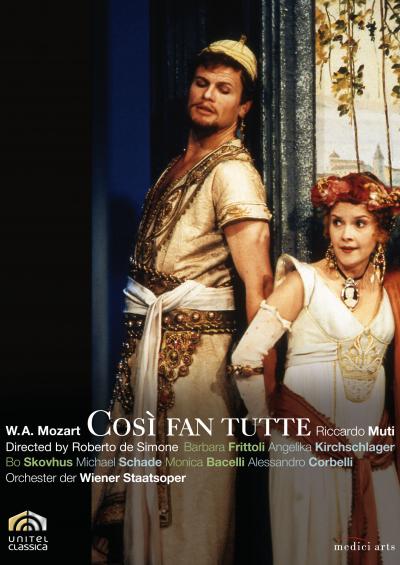 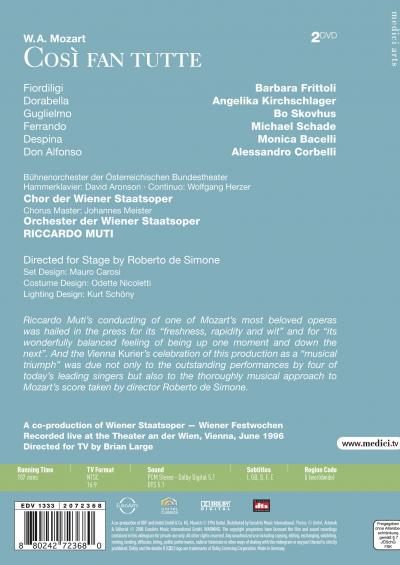 Riccardo Muti’s conducting of one of Mozart’s most beloved operas was hailed in the press for its “freshness, rapidity and wit” and for “its wonderfully balanced rollercoaster of emotions”. Muti’s authoritative approach to Mozart’s music and the remarkably homogeneous team of international soloists were equally applauded. The outstanding performances by four of today’s leading Mozart singers - Barbara Frittoli Angelika Kirchschlager, Bo Skovhus and Michael Schade - were matched by the thoroughly musical approach to Mozart’s score taken by director Roberto de Simone. Così fan tutte is one of Mozart's most beloved operas. Così was written quickly, over the autumn and winter months 1789 and premiered on January 26, 1790, on the eve of the Mozart's 34th birthday. Muti gives both the musicians and the audience time to appreciate Mozart’s music in all its beauty, formal mastery and, above all, its endless variety of depiction of human foibles. He manages to achieve a wonderful and entirely Mozartian balance between seriousness and comedy, between depth of emotion and Mediterranean light-heartedness. A co-production of Wiener Staatsoper with the Wiener Festwochen, this performance was recorded live at the Theater an der Wien in 1996: a grand night at the opera!