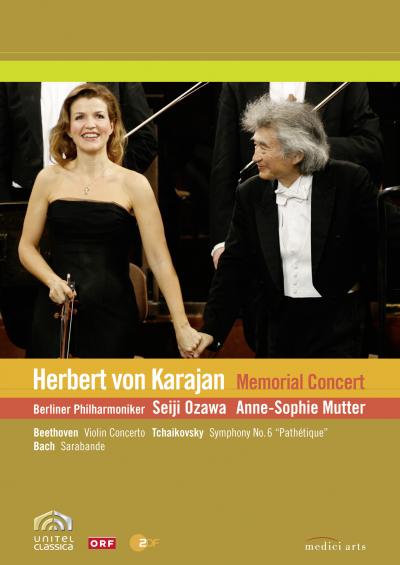 A “triumph of remembrance,” wrote Die Welt following this stirring concert given by the Berliner Philharmoniker under Seiji Ozawa and with Anne-Sophie Mutter as soloist. It left its audience hovering between hushed reverence and deafening exultation. The Golden Hall of Vienna’s Musikverein was the dazzling venue for the live recording of this concert celebrating the 100th birthday of Herbert von Karajan. And there Karajan’s “Berliner” never sounded better, evoking “a time which self-confidently sought the private and subjective in music, and believed it could find them in the mirror of the works” (Frankfurter Allgemeine Zeitung). It is a concert that commemorates Herbert von Karajan for the ages in a supremely moving manner.

Beethoven: Concerto for Violin and Orchestra in D major, op. 61; Tchaikovsky: Symphony No. 6 in B minor, op. 74 „Pathétique”; Bach: Sarabande from Partita in D minor, BWV 1004