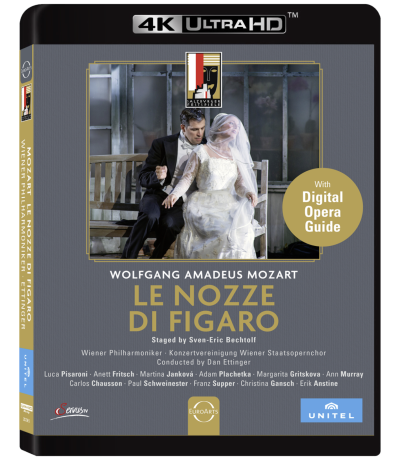 When he wrote Le Nozze di Figaro, Mozart created an unforgettable work about love and desire, about the primal force of uncontrollable passion. Director Sven-Eric Bechtolf presents this storm of emotions to the Salzburg Festival in the very model of an English stately home of the 1920s. The concluding work of the Da Ponte trilogy succeeds as a great evening of opera with the Vienna Philharmonic. Simply marvelous Mozart music from Mozart’s birthplace.

The new 4K standard offers a four times higher resolution compared to the former Full HD picture which allows viewers a deeper immersion into the performance. The new 4K standard for Ultra Blu-ray has a resolution of 3840 x 2160 pixels in the so-called “50p” mode (50 pictures per second), resulting in much higher image definition and smoothness.

On this UHD Blu-ray you can experience 96KHz/24bit High-Res Audio.

Reviews
“Everything about the show exuded immediacy and naturalness: the intriguingly updated production by the director Sven-Eric Bechtolf; the winning performances of a compelling cast; and the supple, glowing playing that the conductor Dan Ettinger drew from the Vienna Philharmonic…”
The New York Times