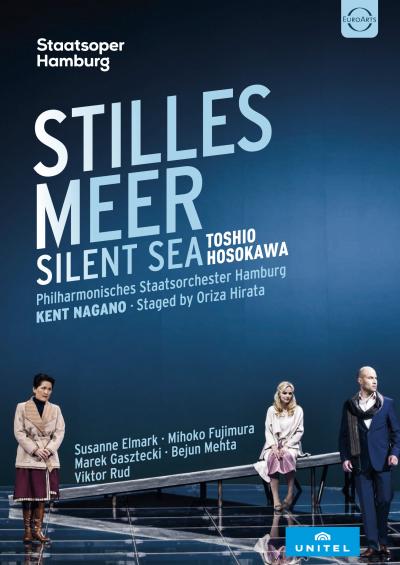 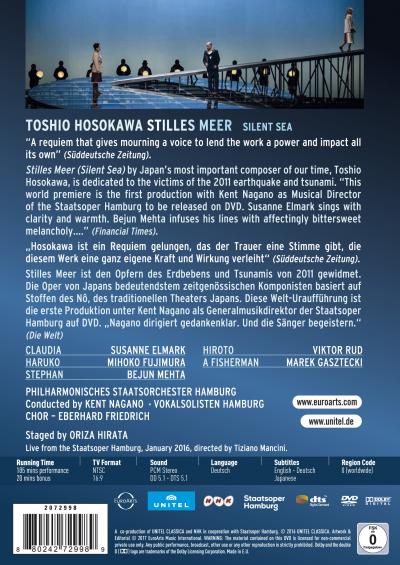 My fourth opera, Stilles Meer, was commissioned by the Hamburg State Opera. The text on which the work is based was written by Oriza Hirata, and the resulting libretto by Hannah Dübgen – who was also the librettist for my opera Matsukaze.
I asked Oriza Hirata to re-work the Japanese Noh play Sumidagawa, a tragedy about a mother who has lost her son, and set it in Fukushima. Benjamin Britten had already made a successful opera adaptation of the Noh piece with his Curlew River. However, since Curlew River was generally based on Christian ideas and notions, I was inclined to stick more closely to the original story and its Buddhist associations. Oriza Hirata integrated the novel Maihime (The Dancing Girl), written by the renowned Japanese author Mori Õgai, into the play Sumidagawa. And that resulted in Stilles Meer, a story that is set in a place devastated by a tsunami and a nuclear disaster.
The Tõhoku earthquake and tsunami in 2011, and the resulting nuclear disaster, caused me to reflect once more on the power of nature and human arrogance. My music is deeply inspired by nature, and my hope is that it gives us cause to reflect that mankind both respects and fears the elemental power of nature – and that in the attempt to control and dominate nature, we ultimately destroy it. My orchestral work Circulating Ocean (2005) describes in music the circle of life: how the ocean water turns into water vapour, then clouds, rain and storms, and falls back to earth, ultimately finding its way back to the sea again. Water is a metaphor for human life; it originates in the sea and eventually returns to where it came from. In the opera Stilles Meer, the ocean, the source of life, is contaminated with radiation and the cycle is interrupted (In one scene, my opera portrays villagers celebrating “Tõrõ nagashi“. In this Japanese ceremony, paper lanterns are used to symbolize the souls of the dead, which are then floated out to sea, the source of life).

Claudia, the protagonist of the story, corresponds to the role of the mother, or the mad woman, in the play Sumidagawa. Like her, she is unable to accept the loss of her beloved son. By giving expression to her grief in song and reciting a Buddhist prayer, her pain can be experienced in another dimension. As the subject of the song and by its transformation into music, her grief is given form, as well as greater depth and transparency. It is my belief that music possesses certain shamanic powers; Claudia is a female shaman (Miko), and through her song she is able to unite the mortal world with the hereafter and communicate with the souls of the dead. I dedicate the opera Stilles Meer to the victims of the Tõhoku earthquake and tsunami.

Reviews
"A requiem that gives mourning a voice to lend the work a power and impact all its own."
Süddeutsche Zeitung

"Stilles Meer" (Silent Sea) by Japan's most important composer of our time, Toshio Hosokawa, is dedicated to the victims of the 2011 earthquake and tsunami. This world premiere is the first production with Kent Nagano as Musical Director of the Staatsoper Hamburg to be released on DVD. Susanne Elmark sings with clarity and warmth. Bejun Mehta infuses his lines with affectingly bittersweet melancholy…"
Financial Times