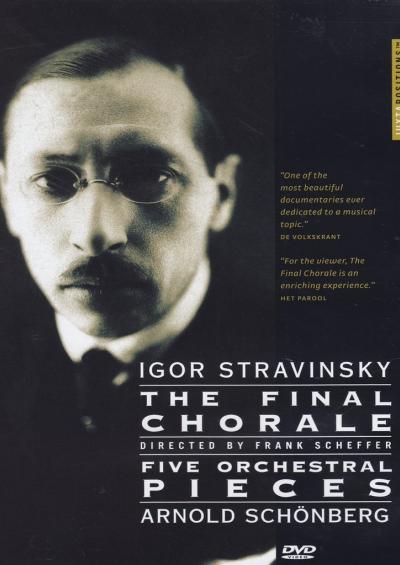 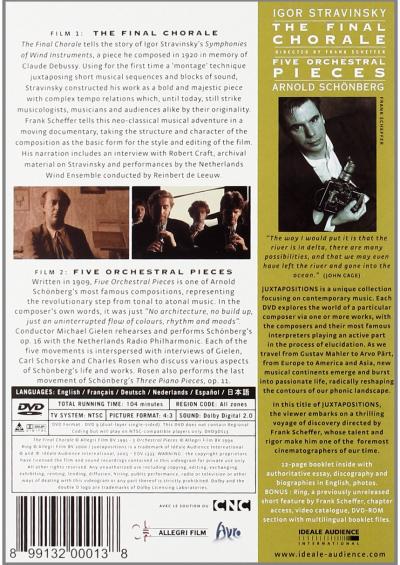 The Final Chorale tells the story of Igor Stravinsky's Symphonies of Wind Instruments, a piece he composed in 1920 in memory of Claude Debussy. Using for the first time a montage technique juxtaposing short musical sequences and blocks of sound Stravinsky constructed his work as a bold and majestic piece with complex tempo relations which, until today, still strike musicologists, musicians and audiences alike by their originality. Frank Scheffer tells this neo-classical musical adventure in a moving documentary, taking the structure and character of the composition as the basic form for the style and editing of the film. His narration includes an interview with Robert Craft, archival material on Stravinsky and performances by the Netherlands Wind Ensemble conducted by Reinbert de Leeuw. Written in 1909, Five Orchestral Pieces is one of Arnold Schönberg most famous compositions, representing the revolutionary step from tonal to atonal music. In the composer's own words, it was just "No architecture, no build up, just an uninterrupted flow of colours, rythms and moods". Conductor Michael Gielen rehearses and performs Schönberg's op.16 with the Netherlands Radio Philarmonic. Each of the five movements is interspred with interviews of Gielen, Carl Schorske and Charles Rosen who discuss various aspects of Schönberg's life and works. Rosen also performs the last movement of Schönberg's Three Piano Pieces, op.11.