Bang on a Can
DVD 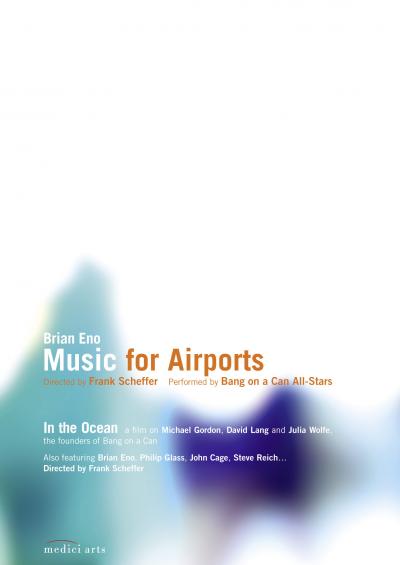 During the 1999 Holland Festival, the New York group, Bang on a Can, performed thier new instrumental version of Brian Eno’s ambient composition of the seventies « Music for Airports ». The performance was accompanied Frank Scheffer’s digitally shot images of Schiphol Airport on a large overhead screen. Frank Scheffer's In the Ocean is unique in the genre of music documentary. With the cooperation of musicians who have never appeared before in the same film (Steve Reich, Brian Eno, Louis Andriessen), it endeavours to explain the complex contemporary music picture of the past thirty years, as well as showing how ideas move back and forth between continents. Scheffer explores the relationship between American and European composers, of how they view and influence each other. This is personified in the film by the story of Bang on a Can, one of the most popular and vital movements in music today. The founders and artistic directors of Bang on a Can are three young American composers: Michael Gordon, David Lang, and Julia Wolfe. They represent a new generation that has established themselves as the heirs to the legacy of American composers going back to Charles Ives, John Cage, and up through Steve Reich and Philip Glass.