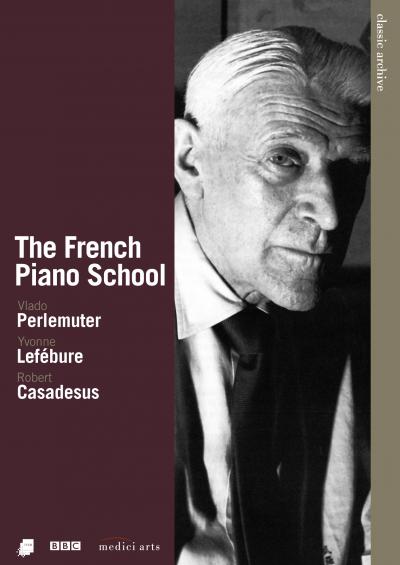 This classic archive DVD features three outstanding representatives of the French Piano School. Vlado Perlemuter, who worked closely with Ravel on many of his compositions, demonstrates in this Paris recording of 1966 his superb mastery of the composer’s Piano Concerto for the Left Hand. Yvonne Lefébure, for whom many French composers of the day wrote music, was also a celebrated interpreter of Beethoven, as is impressively shown not only by her recording of his complete Sonatas for Piano and Violin with Sándor Végh but also by the Piano Sonata Op.110 she performed for French television in 1963. Robert Casadesus, a great lover of French music, frequently played Debussy, Chabrier and Fauré. In 1971, just before his death, he gave a short recital at his home for a French documentary, during which he performed excerpts from Fauré’s Thème et variations.
The two bonus tracks feature Hephzibah Menuhin, who studied for several years in Paris with Marcel Ciampi, and Dino Ciani who came to perfect his art under the guidance of Alfred Cortot.