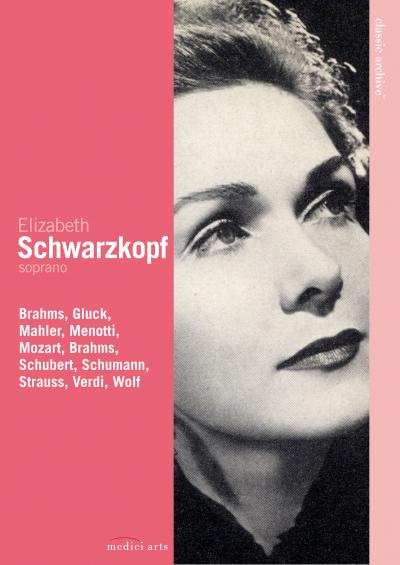 Among the rediscovered treasures are recitals by soprano legend Elisabeth Schwarzkopf (1915-2006), filmed by the BBC and French Television between 1961 and 1971. The German born singer was a timeless beauty and one of the leading soprano voices of the 20th century. She was admired for her Mozart, Strauss and Wolf interpretations and was one of the most influential opera singers and lieder recitalists from the post-war period way into the seventies. These recitals – retrieved from the archives - allow us to re-encounter Schwarzkopf in her favourite lieder repertoire with arias and songs by Gluck, Menotti, Mozart, Schubert, Schumann, Verdi and Hugo Wolf. In the BBC recitals captured in this compilation, Dame Schwarzkopf was accompanied by the world’s most renowned accompanist Gerald Moore. The concert recording by French television further illustrates Elisabeth Schwarzkopf’s musical excellence. Here, the soprano’s voice melds wonderfully with the orchestra’s instrumental sonorities in works by W.A. Mozart, Giuseppe Verdi and Richard Strauss. The collection of archival treasures, which were remastered for this DVD, allows the viewer a glimpse into the mastery of the unforgettable Elisabeth Schwarzkopf.