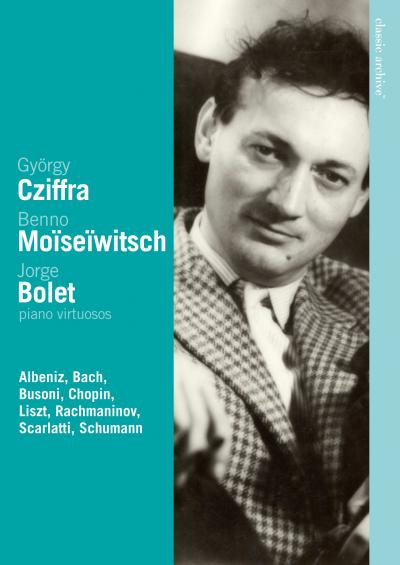 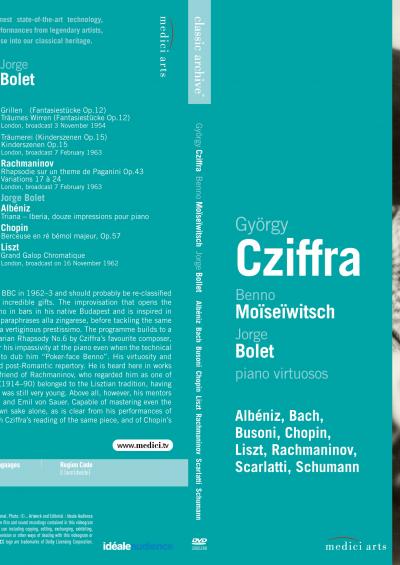 EuroArts offers a new collection of music films: ”Classic Archive“ presents great performances by legendary artists, remastered using the latest digital technology and enhanced with commentary for today’s audiences. These jewels of music broadcasting have been salvaged from various archives and been made accessible for home viewing audiences - appealing and enjoyable performances, that offer a unique glimpse into our classical music heritage. This edition combines three fascinating piano virtuosi who have thus far been underrepresented on video recordings despite the sheer grandeur of their music-making: György Cziffra, Benno Moïseïwitsch and Jorge Bolet appear here in recordings made by the BBC in 1962 and 1963. The recital by György Cziffra (1921–94) opens with an improvisation inspired in particular by Chopin, whose Étude in C major Cziffra then plays at a vertiginous prestissimo. The programme builds to a thrilling climax with a high-octane performance of the Hungarian Rhapsody No.6 by the pianist’s favourite composer, Franz Liszt. Benno Moïseïwitsch (1890–1963) was famous for his impassivity at the piano even when the technical difficulties seemed insurmountable. His virtuosity and musicality were marvellously well suited to the Romantic and post-Romantic repertory. He is heard here in works by Schumann and Rachmaninov. Moiseiwitsch and Rachmaninov were close friends and the composer regarded him as one of the finest interpreters of his music. Like Cziffra, Jorge Bolet (1914–90) belonged to the Lisztian tradition, having been privileged to work with Leopold Godowsky while he was still very young. Above all, however, his mentors included two of Liszt’s most famous pupils, Moritz Rosenthal and Emil von Sauer. Capable of mastering even the most difficult scores, Bolet never sought virtuosity for its own sake, this is clear in his performances of Liszt’s Grand ‘galop chromatique’, which contrasts sharply with Cziffra’s reading of the same piece, and of Chopin’s Berceuse.