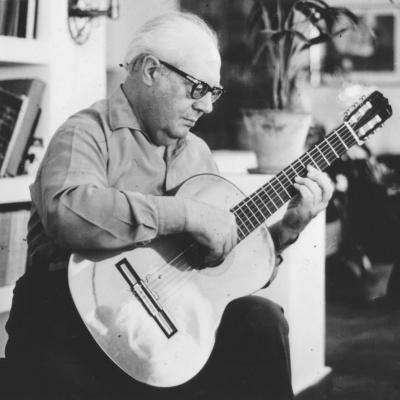 Fritz Kreisler once said that the two greatest performing musicians of the twentieth century were Pablo Casals and Andrés Segovia. He had two prime ideas in mind, first, their extraordinary spirits and second, the fact that both elevated their chosen instrument to unprecedented levels on the international concert platform.

In fact, in Western classical music, the achievement of Andrés Segovia is unique. As a boy in Granada, he was captivated by the variety of tone colours and the wealth of harmonic possibilities of the Spanish guitar and he saw a future for it that nobody had previously even dreamed of. On those seemingly slender beginnings he set out on a remarkable quest. Using the work done by Fernando Sor and Francisco Tarrega in the nineteenth century and adding the compositions of Johann Sebastian Bach, he began to build not only a career for himself, but to lay the foundations of modern guitar technique and the present-day international popularity of the Spanish guitar as a serious musical instrument.

Within twenty years, Andrés Segovia had taught himself the instrument, revolutionised the technique and won acceptance for it on the concert platforms of Europe. He spent the next fifty years giving concerts in almost every part of the world and was at various times a resident of the United States, Switzerland and Argentina.

At the age of 75, he returned to his native Andalusia with his young wife, Emilita, and built a new home, Los Olivos, on the Costa del Sol as close as he could to Granada. This film is made in the relaxed atmosphere of his new home and in Jaen and Granada where he spent his formative years. The idea is very simple: to give a great man an opportunity of looking back on sixty years of concert life and one of the most unusual contributions to Western music made by any performing musician in the last hundred years.

Segovia talks in his inimitable poetic way about what he has tried to do, and plays some of the music most closely associated with him and his extraordinary career.