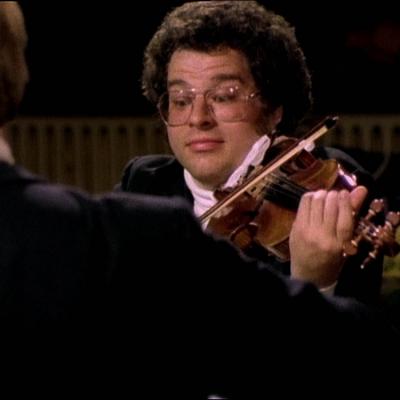 Itzhak Perlman plays the Brahms Violin Concerto with the Philharmonia Orchestra of London, conducted by Lawrence Foster.
This is made as a pair with the Beethoven Concerto, but, in order to present another side of Itzhak Perlman’s many-faceted musical personality, it is shot at a public concert in true concert conditions where this musician is at his best and his most revealing.
The Philharmonia has been one of London’s leading orchestras since it was founded more than thirty years ago, by Walter Legge as a recording orchestra for EMI, and it has remained a leader in the field since that time.
The American conductor Lawrence Foster has an international reputation, both in the concert hall and the opera house. He is Musical Director of L’Orchestre National de Monte Carlo, General Music Director of the Duisburg Orchestra and Principal Guest Conductor of the Dusseldorf Opera. He has had a close association with Itzhak Perlman for many years.
Itzhak Perlman was born in Tel Aviv in 1945 of Polish parents and first showed an interest in the violin at the age of three-and-a-half, when he heard a broadcast performance by Heifetz. At the age of four-and-a-half, he contracted polio, but the impression of his first encounter with the violin survived and, against advice and tremendous personal difficulties, he persisted in his studies.
When he was thirteen, is family took him to New York to study at the Juilliard School with Ivan Galamian and Dorothy DeLay. He made his first Carnegie Hall appearance in 1963, won the Leventritt Award in 1964, which is America’s premier musical award and, in the following ten years, and established himself as one of the world’s great violinists.