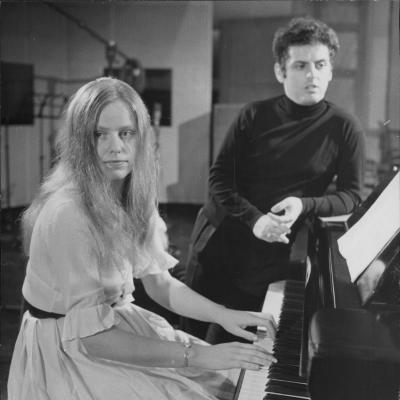 Jacqueline du Pré had a very unusual and elevated relationship with the Elgar 'cello Concerto. For critics and public alike, her performances focused new attention on the inherent pathos in Elgar's melancholy masterpiece and had a ringing authority that has never been matched by anyone else.
She played it first at the Royal Festival Hall in London on 21 March 1962 when she was just seventeen years old. On the following morning, Neville Cardus, one of England's most distinguished writers on music, described the work in The Guardian as, "A swan-song of rare and vanishing beauty", and he reviewed her performance of it in such strong and poetic terms as any seventeen year old has ever received from a senior critic. He concluded his review with these words:
"Those actually present were witness, on the first day of spring, to an early blossoming in Miss du Pré's playing, and such a beautiful blossoming as this year, or any other year, is likely to know for a long time to come.”
In the next few years, Jacqueline du Pré won an enthusiastic audience for this concerto, not only in the United Kingdom but in the rest of Europe, in the United States and in the Soviet Union.
She played the work for the last time in 1973, when her brilliant career as one of the finest musicians that Britain has ever produced, was cut short by multiple sclerosis. She could no longer play the 'cello, but she remained a brave and adventurous spirit, her passion for music undimmed and her attitude in coming to terms with her illness as touching as it was courageous.
This film begins with an account of her activities after the onset of her illness. It ends, at Jacqueline du Pré's request, with the film which we made with her in 1967, a film which sketches her childhood and the development of her musical talent, her meeting with Daniel Barenboim and their marriage in 1967, her relationship with the Elgar Concerto and, finally, a complete performance of the work with the Philharmonia Orchestra conducted by Daniel Barenboim: a performance that is remarkable by any standards and, for many, quite unforgettable.
There are contributions by Daniel Barenboim, Sir John Barbirolli, Charles Beare, William Pleeth, Iris du Pré and Derek du Pré with music by Camille Saint-Saëns, Iris du Pré, William de Fesch, Enrique Granados, Max Bruch, Johannes Brahms and Edward Elgar. The first nine minutes are in colour and the rest is in black and white, which seems actually to enhance the viewer's awareness of the historical character of the film.