Modest Mussorgski: Pictures at an Exhibition 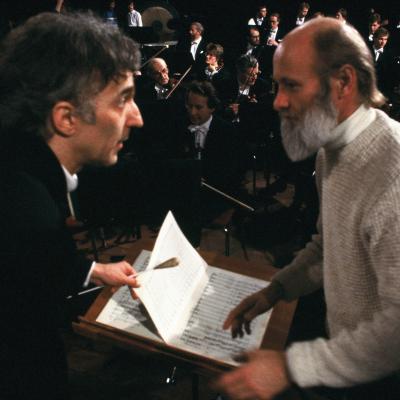 A television film about a single work, Modest Mussorgski’s “Pictures at an Exhibition”. Written as a tribute to a lost friend, Victor Alexandrovich Hartmann, it is a strange and moving masterpiece which has become Mussorgski’s most popular work. It is also probably the most frequently orchestrated piano piece of all time. It is nevertheless largely misunderstood, perhaps precisely because it is so widely known in other composers’ arrangements, in particular the orchestration by Maurice Ravel which, in the opinion of Vladimir Ashkenazy, is very far-removed from the spirit of Mussorgski’s original for the piano. He insists that it is not an entertainment piece, nor an attempt to describe or illustrate Hartmann’s drawings in music. He sees it as a profoundly-felt expression of Mussorgski’s view of life.
The film is in three parts which may be transmitted as one continuous whole or as a series of three programmes. It is also possible to transmit Parts 1 and 2 together, making Part 3 a separate programme, but an important element in this unusual format is the idea that, for all the splendour and popular success of the orchestral versions, they all lack something of the quality and power of Mussorgski’s original composition for the piano, particularly in the hands of Ashkenazy.

Part 1
Introduction by Vladimir Ashkenazy and Christopher Nupen
Duration: 26'42"
Who was Mussorgski? Who was Hartmann? How did the work come to be written? And why has it been so frequently orchestrated? What was Mussorgski trying to achieve? To what extent did Ravel misunderstand or disregard the original?
Vladimir Ashkenazy is uniquely qualified to guide us to the heart of Mussorgski’s strange masterpiece. He is a Russian-born and Russian-trained musician, capable both of playing the original piano work as well as anybody on the concert platform today and conducting the orchestral version by Leo Funtek.

Part 2
“Pictures at an Exhibition” orchestrated by Leo Funtek with the Swedish Radio Orchestra conducted by Vladimir Ashkenazy
Duration: 34'52"
There are more than 12 published orchestrations of this work. We have chosen the version by Leo Funtek, written in 1922 a few months before the appearance of the orchestration by Maurice Ravel, because we believe that it is truest to the spirit of Mussorgski’s original. This is a straight performance shot in the Berwaldhallen in Stockholm with ten synchronous film cameras. The orchestral filming techniques are a development of the style which we evolved in Elegies for the Deaths of Three Spanish Poets, which won the International Emmy Award and the British Academy International Award in 1979 and the RAI Prize at the Prix Italia in 1980, a style that was further developed in Ottorino Respighi – A Dream of Italy, which received an International Emmy Award nomination in 1982.

Part 3
Mussorgski’s Original Piano Work played by Vladimir Ashkenazy at a public concert in the Barbican Centre in London
Duration: 34'54"
It is probably true to say that there is no pianist on the concert platform today better able to give an authentic performance of Musorgski’s original. The whole idea to make this film springs from Ashkenazy’s unique ability to play and conduct this work and from the conviction that in Ashkenazy’s hands the piano version has much more to offer than is generally recognised. This becomes dramatically clear in a very interesting way when Ashkenazy’s performance is heard in close proximity to any orchestral version.