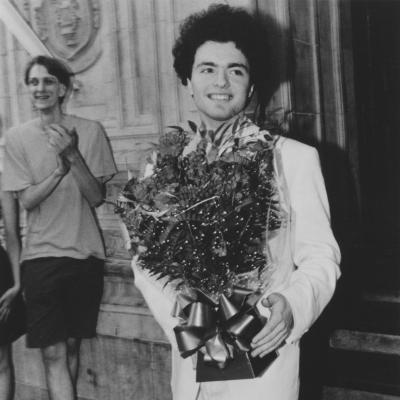 On the tenth of August 1997 Evgeny Kissin played the first solo recital in the hundred and three year history of the London Promenade Concerts. It was a memorable occasion, to say the least, and has been described as perhaps the most extraordinary solo recital to have taken place in London since Paganini’s last concert.
The enthusiasm of the Promenaders produced astonishing scenes and resulted in Evgeny Kissin playing the longest succession of encores in the entire history of the Proms.  With the piano placed in the middle of the arena, surrounded by 900 Promenaders, both the images and the performances were remarkable and so we have made the encores into a performance film - but with the added element of historic occasion.
The film also includes a short interview with Kissin and the Chopin Nocturne Opus 27 No. 2 which is one of his favourite pieces and was one of the jewels of the recital itself which preceded this extraordinary sequence of encores.