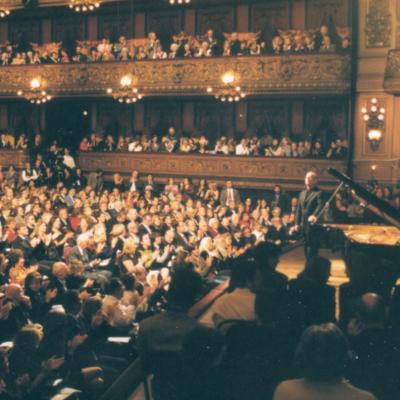 They have not forgotten him, this son of the city, leading conductor and pianist, and indefatigable campaigner for international understanding through the spirit of music. Now, on the night of 19 August 2000, they have flocked in their thousands like pilgrims to the time-honoured Teatro Colón just to hear him. To say the atmosphere in the hall is tensely expectant would be gross understatement, for this is a momentous event. At last their adored idol steps on to the stage - to perform again in his native city half a century after his first public appearance. The multitude rises and sings for him. Three hours and thirteen encores later, he can find no other way of disengaging himself from the ecstatic throng than to point out that the Teatro Colón must close its doors at midnight. One last piece, and then he goes - ending what has surely been one of the most memorable evenings in the Argentinian capital's concert history.