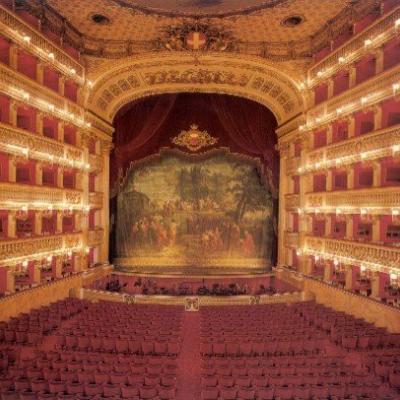 After being razed by a fire, Naples’ traditional royal opera house, the Teatro di San Carlo, was rebuilt in record time under the direction of architect Antonio Niccolini, reopening on 12 January 1817. The building exemplifies Italian opera house architecture in the 18th/19th century. Its design did not differ substantially from that of other theaters, even though, with its over three thousand seats, it was the world’s largest opera house, existing in Italy’s largest city at the time. When the arena, with its six tiers of boxes, was reopened to the public after the tragic blaze, the architecture enraptured opera lovers far beyond the city’s borders. Naples is one of the birthplaces of Italian opera and thus of opera in general. It was able to develop into a center of the belcanto style because its famous conservatories brought forth musicians and composers like Cimarosa and Pergolesi who provided new impetus to the art of song. With its outstanding orchestra, the royal theater acted like a magnet on both virtuoso singers and the champions of bravura song. This is why the film spotlights the most recent premiere of Verdi’s Trovatore in Naples, not only as a musical example but as the very epitome of Italian opera. In addition, it presents the most illustrious Italian composers in a historical overview: starting in 1815, Giacchino Rossini served as artistic director of the San Carlo, and many of his works were premiered here. Gaetano Donizetti headed the house for sixteen years, composing sixteen operas for it, including the immortal Lucia di Lammermoor. The most distinguished Italian opera composer of the 19th century, Giuseppe Verdi, succeeded him in Naples. Verdi has been one of the legends of the San Carlo since he first premiered one of his works here in 1842 (Alzira). He later continued his affiliation with the institution, serving as artistic director for one year. It was he who suggested building an orchestra pit.