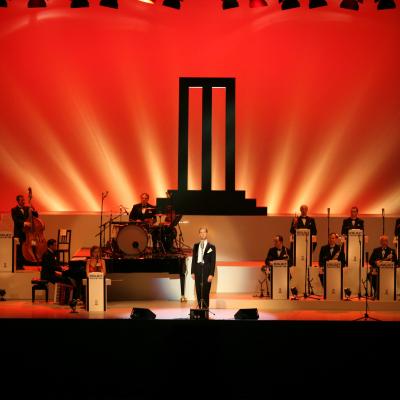 On a Sunday evening in August in the Berliner Waldbühne around 20,000 people with rain gear and blankets held thousands of colorful umbrellas while listening to Max Raabe and his Palast Orchester’s hits of the twenties and early-thirties. As the most exquisite interpreter of these tunes, Max Raabe and his Palast Orchester play them with such precision, jovial vitality and utter perfection that the 80 year old songs sound as fresh and lively as they did when first performed. They therefore aren’t simply remakes, but wonderful new interpretations which reveal the timeless modernity of these brilliant works. The people of Berlin have had to wait one and a half years for the return of their Palast Orchester. The tour in which they performed for excited audiences all over the world included concerts in New York, Shanghai, Tokyo, Rome, Paris and Moscow.