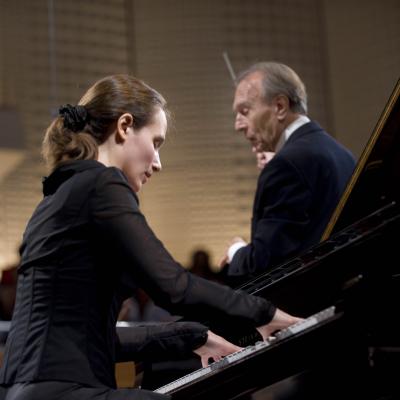 The Lucerne Festival Orchestra and Claudio Abbado performed a Russian night at Lucerne. Tchaikovsky’s symphonic poem The Tempest is based on the famous play by Shakespeare and shares many similarities in musical structure with Tchaikowsky’s better known „Romeo and Juliet” overture. The famous French-American pianist Hélène Grimaud performed Rachmaninoff’s widely known Piano Concerto No. 2 which premiered in 1901 and which has not lost any of its fascination to musicians and audiences alike. When 28-year-old Stravinsky was assigned to compose a ballet he wouldn’t know that The Firebird would be his „breakthrough piece”. In 1911 Stravinsky arranged the material for concert performance resulting in a slightly shortened suite and created two additional arrangements in 1919 and 1945. Prepared by Euroarts, this film shows one of the major nights of this year’s Lucerne Festival with Abbado’s handpicked orchestra and one of the most exciting pianists of our time.

Tchaikovsky: The Tempest; Rachmaninov: Piano Concerto No. 2 in C minor; Stravinsky: The Firebird