András Schiff at the Teatro Olimpico 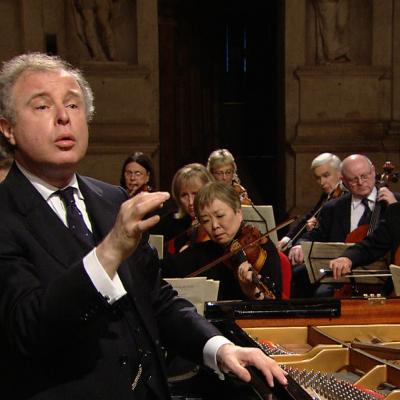 It was on the spur of the moment that András Schiff and a few of his friends decided to establish the Cappella. The pianist’s quirky humour is reflected in the rather ambiguous name of the ensemble, “Andrea Barca”. Schiff is fond of telling the story of Signor Barca. Apparently he was a legendary page-turner for Mozart in Salzburg, but in the course of the centuries all traces of his subsequent career in Vienna have unfortunately been lost. In the meantime, a fully-fledged partnership has developed from these light-hearted beginnings. Schiff appears regularly with “his” Cappella, conducting from the keyboard. The musicians’ personal friendship makes for unforced, captivating performances of superb quality. One landmark in this partnership is the series of concerts at the Teatro Olimpico, Europe’s oldest existing theatre. Designed almost 450 years ago by Andrea Palladio, it is a very special setting for Mozart’s magnificent D minor piano concerto. Schiff precedes the work with the Don Giovanni overture, leading on into the concerto without a break. The 54' version includes Don Giovanni's overture and the Piano Concerto plus Bach's Fantasia and Fugue plus an introduction by András Schiff while the version of 74' offers the complete concert, including Mozart's Symphony No. 35 "Haffner".