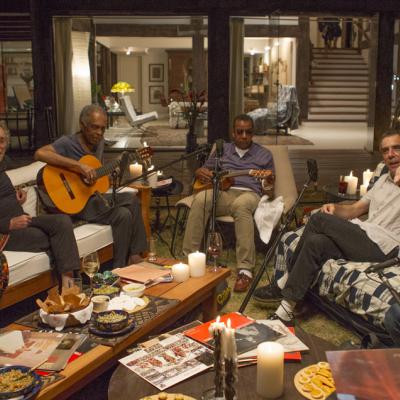 The man who “made” Brazilian music - Meet Gilberto Gil, Caetano Veloso, Marisa Monte, Chico Buarque, Jorge Ben Jor and of course the man himself: André Midani! Based on his autobiography „MUSIC, IDOLS AND POWER - VINYL TO DOWNLOAD“ this unique session of intimate conversations reveals the key events in the history of Brazilian music through the eyes of André Midani, who helped shape the Brazilian music scene like no other from the 1950s to the new millennium. His story is told through informal gatherings and jam sessions that took place at his home with artists, intellectuals and journalists who influenced him and who were in return influenced by him. These gatherings contributed many things, both material and immaterial, to the culture of the Brazil. With Gilberto Gil, Caetano Veloso, Marisa Monte, Chico Buarque, Frejat, Jorge Ben Jor, Erasmo Carlos, Boni, Fernanda Torres, Washington Olivetto, Carlos Lyra, Miúcha, Roberto Menescal, Baby Brazil, Dadi, Liminha, Nelson Motta, Carlos Diegues, Fernanda Montenegro - and many others