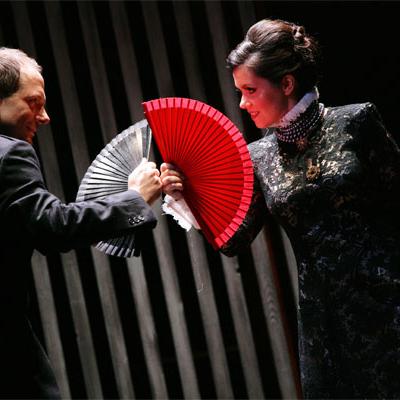 Luci mie traditrici was presented on 19th May 1998 in the Schwetzinger Festpiele under the German title by Sciarrino Die tödliche Blume (The Deadly Flower). As is known, it was in Sciarrino’s first intention to dedicate the opera to Gesualdo, motif why this tragedy is identified with that of the great madrigalist. Salvatore Sciarrino’s opera Luci mie traditrici begins with a bewitchly beautiful melody sung by a female voice, a quotation from an elegy by the Renaissance composer Claude Le Jeune. Bewitchingly beautiful – but about the decline of beauty. In Sciarrino’s composition, which he described as the »Renaissance of music tragedy«, this melody returns but sounds more fragile each time before almost completely vanishing at the end. Almost 50 years after Gesualdo’s death the Italian poet Giacinto Andrea Cicognini wrote a play about the events leading up to this deed, upon which Sciarrino created his libretto about the conflicts which exist within people who love: the longing for everlasting love which collides with spontaneous passion, longing, a sense of ownership and self-torture, unrequited, one-sided desire, disappointment and the longing for revenge.