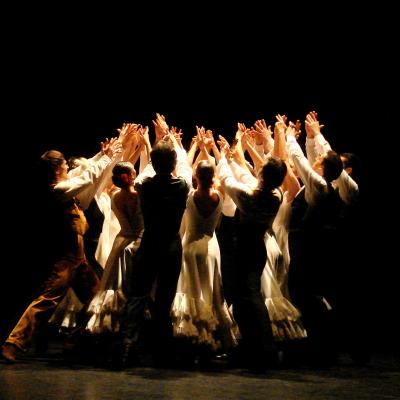 Suite flamenca consists of seven pieces of traditional flamenco dance presented with Gades' own unique insight on the aesthetics of flamenco dance. Consisting of solos, duets and group dances, all sides of flamenco dancing can be seen. Gades' interpretation initially described as avant-garde is now considered as classic. With flawless solo performances by Stella Arauzo and Miguel Lara, and artists from the Compania Antonio Gades, this is a performance to enjoy. Both performances (Bodas de Sangre, Progr.No. 5919 and Suite Flamenca) were filmed at the Teatro Real, Madrid, to mark the 75th anniversary of Gades' birth.