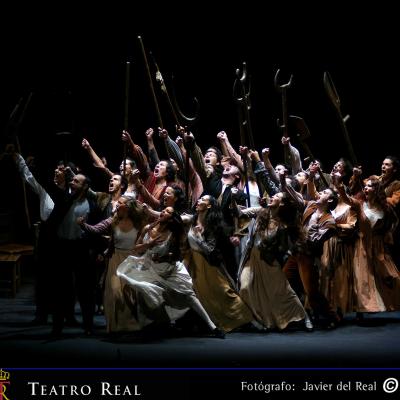 Antonio Gades’ last choreographed work, Fuenteovejuna, is a signature piece of purity and precision of Spanish dance. Based on a true event that inspired Lope de Vega to write this classic play in 1619, Fuenteovejuna is about the people of a village in Córdoba ruled by a tyrannical commander whose actions of droit de seigneur, violence and abuse engender their intense hatred. Until one day, encouraged by their women, the villagers choose freedom and, armed with farming implements, they take the law into their own hands. When the villagers are interrogated by a magistrate sent by King Ferdinand and Queen Isabella to establish who was responsible, no one admits to having done anything, each and every inhabitant only saying ‘I’. In other words, ‘Fuente Ovejuna did it’. First performed in 1994 in Genoa, Fuenteovejuna is considered as the ultimate work of Spanish dance. Gades highlights the enormous richness of this discipline, the flamenco, the folklore; the stylised dance serves to tell perfectly the story of solidarity through which Gades knew how to make Spanish dance and flamenco become a universal language