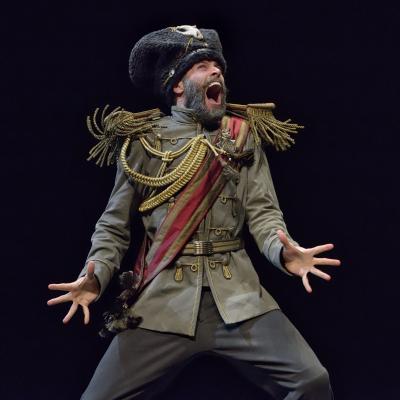 Neither simply dance or traditional theatre, but an exciting and exhilarating new form that transcends either genre. Revisor is performed by 10 incredible dancers of Pite’s company Kidd Pivot, to a soundtrack recorded by 9 voice actors. The dancers lip sync to the actors’ words in Pite’s trademark fluid, expressive and witty style. Revisor is based on a Russian anecdote about mistaken identity that surfaced in 1833, and quickly spread. It is now widely accepted as probably true. In 1836, the story took shape in a five-act play: The Government Inspector (Revisor) by Nikolai Gogol. The play premiered in St. Petersburg before the Czar who, according to reports, laughed and applauded, and is said to have remarked “Everybody gets it, and I most of all!” The play was in disguise as a comedy.
Ten dancers embody the recorded dialogue of some of Canada’s finest actors, exploring conflict, comedy and corruption in the potent relationship between language and the body.
Revisor reunites the creators of the international stage hit Betroffenheit (winner of the Olivier Award for Best New Dance Production 2017) with director Jeff Tudor, who won the Rose d’Or (Arts) and Golden Prague Awards 2018 for his capture of Betroffenheit for the BBC.

Recorded at the Sadler's Wells, London