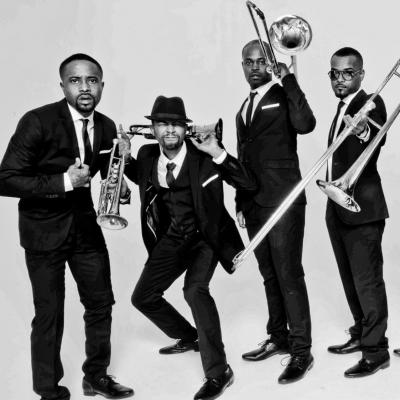 The Hypnotic Brass Ensemble is a family band, consisting of seven brothers, trained in musical instrumentation since they were young children. Their father is the jazz trumpeter and band leader Kelan Phil Cohran (Earth, Wind & Fire, Chaka Khan, Sun Ra), who subsequently formed a youth orchestra with his children, that now has become the Brass Ensemble we know. The family toured the United States performing original jazz compositions as well as covers from Duke Ellington to Bach and Beethoven.
By now the brother's sound has came into their own, adding a splash of Hip Hop, Rock and Reggae in the mix as well. Their undisputed talents caught the ears of other musicians, such as Brooklyn rapper Mos Def or UK Brit-Pop pioneer Damon Albarn, who featured the ensemble on his crossover project Gorillaz.