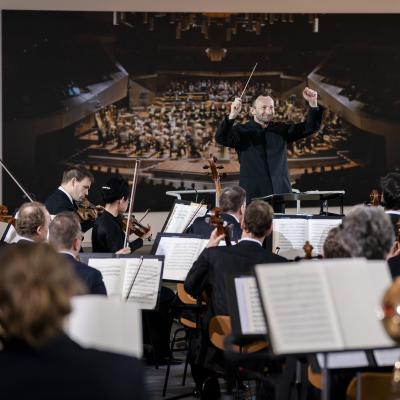 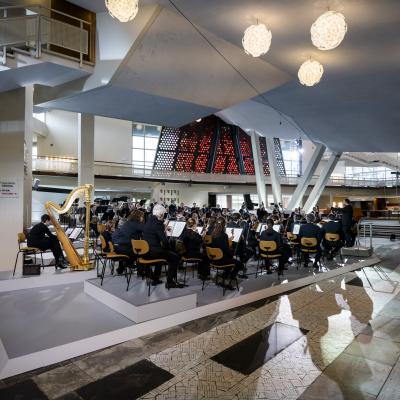 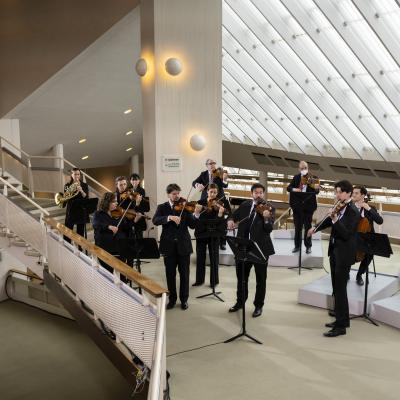 The Europakonzert 2021 takes place in the foyer of the philharmonic hall in Berlin. Often overshadowed by the actual concert hall with its revolutionary vineyard layout, this part of Hans Scharoun's spectacular building is no less extraordinary and deserves to play a starring role for once. The asymmetrical surfaces, staircases, supporting pillars and galleries repeatedly open to surprising, even confusing perspectives; the path to the music does not run directly, but around corners, constantly changing vistas, stimulating reflection even as one approaches. Since the inception of the lunch concerts at the latest, the space has been established as a gracious performance venue in its own right. This year’s European Concert programme reflects the special situation we find ourselves in, and plays with proximity and distance, with works not only for a large orchestra, but also for differentiated and spatially separated subsets of the orchestra.

Blacher: Fanfare Festive (premiered at the opening of the Philharmonie, 1963)
Ives: The Unanswered Question
Mozart: Serenade No. 8 in D Major, K. 286 (269a) Notturno
Penderecki: Emanations for 2 string orchestras
Tchaikovsky: Suite No. 3 in G Major, Op. 55
Adams: Short Ride in a Fast Machine