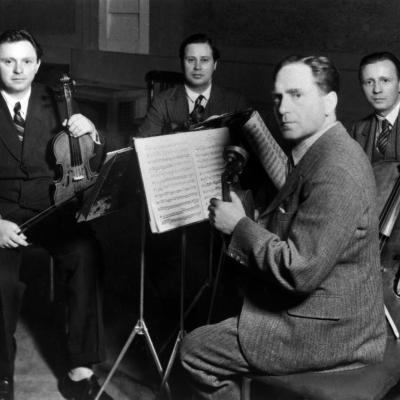 Before Hitler’s arrival in 1933, Germany was the centre of the musical world. Within five years, thousands of musicians had fled the country as the Nazi regime tightened its race laws and fashioned its cultural image.

"EXIT: MUSIC" explores the lives of five composers, the stories of their escape; the ways in which exile shaped their identities and careers, and how their music all but disappeared after the war: Paul Ben-Haim who left Munich to became Israel‘s leading composer; Adolf Busch, one of the few German musicians who refused to perform in Germany under the Nazi regime, the half-Jewish Walter Braunfels, who remained in Germany and went into a self-imposed internal exile; Erich Korngold, who found refuge and a second career as Hollywood‘s most distinguished film composer, and Mieczyslaw Weinberg, who fled Warsaw and settled in Moscow where he was later imprisoned under Stalin.
Their stories are told by family members and biographers, with commentary from experts in the field and the inclusion of rare archival footage.