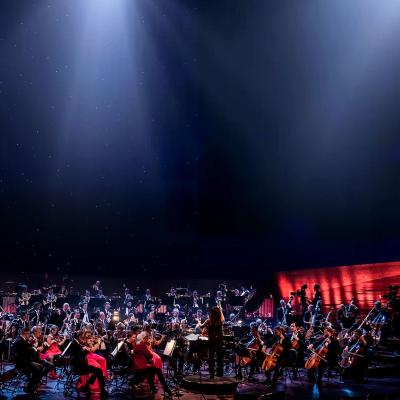 Hollywood Gala with music from the best and Oscar-awarded Hollywood movies.

DR Koncerthuset rolls out the red carpet for a sparkling Hollywood gala with the DR Symphony Orchestra, DR Junior Choir, Andrea Oehlenschlæger, Diluckshan Jeyratnam, and host Ane Cortzen. The audience awaits a musical firework display from the best Hollywood films such as "Pirates of the Caribbean", "Braveheart", "E.T." - and many more.

The DR Symphony Orchestra offers musical delights from the greatest Hollywood films. From the great drama over love and jealousy to the wildest journeys and fastest cars - spiced up with a single murder (or two). The evening also features a special section dedicated to the best music from the iconic Oscars.

The evening's two young soloists haven't (yet) taken Hollywood by storm, but they have taken audiences and press in Denmark by storm. Andrea Oehlenschlæger, only 23, made headlines when she broke out as a musical star in "Bodyguard - The Musical" in the autumn of 2021. "She's terrific!" wrote Berlingske, and Politiken added "an incredible singing talent".

Here's your chance to experience Andrea's debut in the concert hall with Whitney Houston's "I Will Always Love You" - along with several wonderful movie hits like "Hanging Tree" from "Hunger Games", "Themyscira" from "Wonder Woman", and "Shallow" from "A Star Is Born" - accompanied by the broad, symphonic sound of the DR Symphony Orchestra.

The evening's other soloist, Dilukshan Jeyaratnam, has received a Reumert Talent Award for his performance in the musical "The Prince of Egypt", which prompted Politiken's critic to remark that "they could well throw him straight onto the stage in Broadway or the West End." Most recently he has starred in musicals such as "American Idiot", "Urinetown", and "The Hunchback of Notre-Dame".