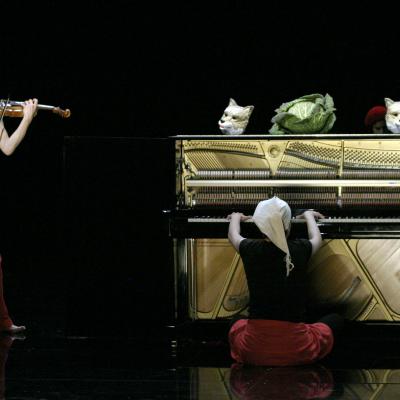 Little Red Riding Hood begins, like all fairy tales, with: "Once upon a time..." For children of all ages the composer Georges Aperghis imagined a tale in music and movement: he chose the very first version written by Charles Perrault almost 300 years ago. Here, there is no hunter to free Little Red Riding Hood and her grandmother from the wolf's belly, but a moral for each to savour according to their age and experience. Then, Georges Aperghis wrote pages and pages of music for two pianists and a violinist, two clarinettists and a saxophonist, who also plays the tuba and tap dances. Then he shut them up inside a big black box with his pages of music and for a very long time they played every possible game imaginable, engaging in mysterious rituals and odd movements, uttering strange incantations and scaring each other. This novel stage production of the well-known fairytale was specially filmed for television.