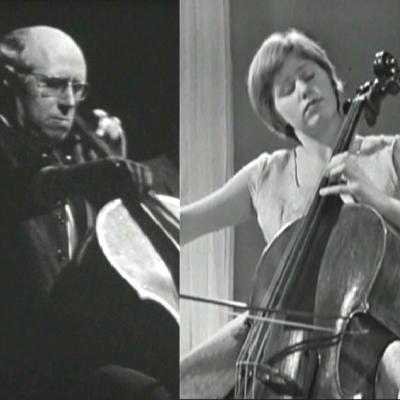 Today’s Classic Archive pays tribute to cello prodigy Jacqueline du Pré, who left an indelible mark on the history of her instrument over the course of her foreshortened career. Born into a musical family, Jacqueline Du Pré is seen here accompanied on the piano by her mother, in a recording made at the BBC studio, when Du Pré was just 17, a year after her official debut at Wigmore Hall in London. Despite her youth, the qualities that made Du Pré’s reputation are already noticeable: an intense, quivering and passionate playing style; and an ample, generous sound. They cause us to regret all the more that this remarkable cellist was taken from us too early, succumbing to sickness at the age of 42. After Jacqueline du Pré, we will hear one of her teachers, Mstislav Rostropovitch, with whom she studied in Moscow. That is why we thought it would be interesting to complete this programme with one of his interpretations of the Variations Beethoven composed to an aria from Mozart’s Enchanted Flute. Recorded in Paris in 1970 with Vasso Devetzi, one of his most faithful accompanists throughout his long career, Rostropovitch reminds us that, in addition to tirelessly presenting premieres of new scores, he was also a formidable interpreter of classic works from the past.